Competent, community-minded physicians have chosen to train at The Wright Center for Graduate Medical Education, formerly the Scranton Temple Residency Program, since its inception in 1976. In its formative years, Graduate Medical Education (GME) funding from the Centers for Medicare & Medicaid Services (CMS) was infused through community hospital partners in Northeastern Pennsylvania (NEPA), and the organization focused solely on training Internal Medicine residents and patient care delivery.

A GME affiliation with the U.S. Department of Veterans Affairs (VA) enabled expansion in 2010. The Wright Center for Graduate Medical Education's federal GME funding was further diversified as the organization received a pioneering Teaching Health Center (THC) Highway to Community Relevance of Graduate Medical Education grant from the Health Resources and Services Administration (HRSA) in 2011.

Today, an intercompany relationship between The Wright Center for Graduate Medical Education and its affiliated entity, The Wright Center for Community Health — a newly minted, HRSA-designated Federally Qualified Health Center Look-Alike (FQLA) — enables a robust, thriving, regional Graduate Medical Education Safety-Net Consortium (GME-SNC) in NEPA to optimize care delivery while fueling a pipeline for sustainable workforce development. While most Federally Qualified Health Centers (FQHCs) and FQLAs attain this federal designation prior to becoming clinical learning environments for residents, The Wright Center for Community Health is unique, in that it began as a community-based healthcare delivery system that integrated educational funding and clinical delivery revenues to sustain its mission-driven work, essentially a reverse-integration. 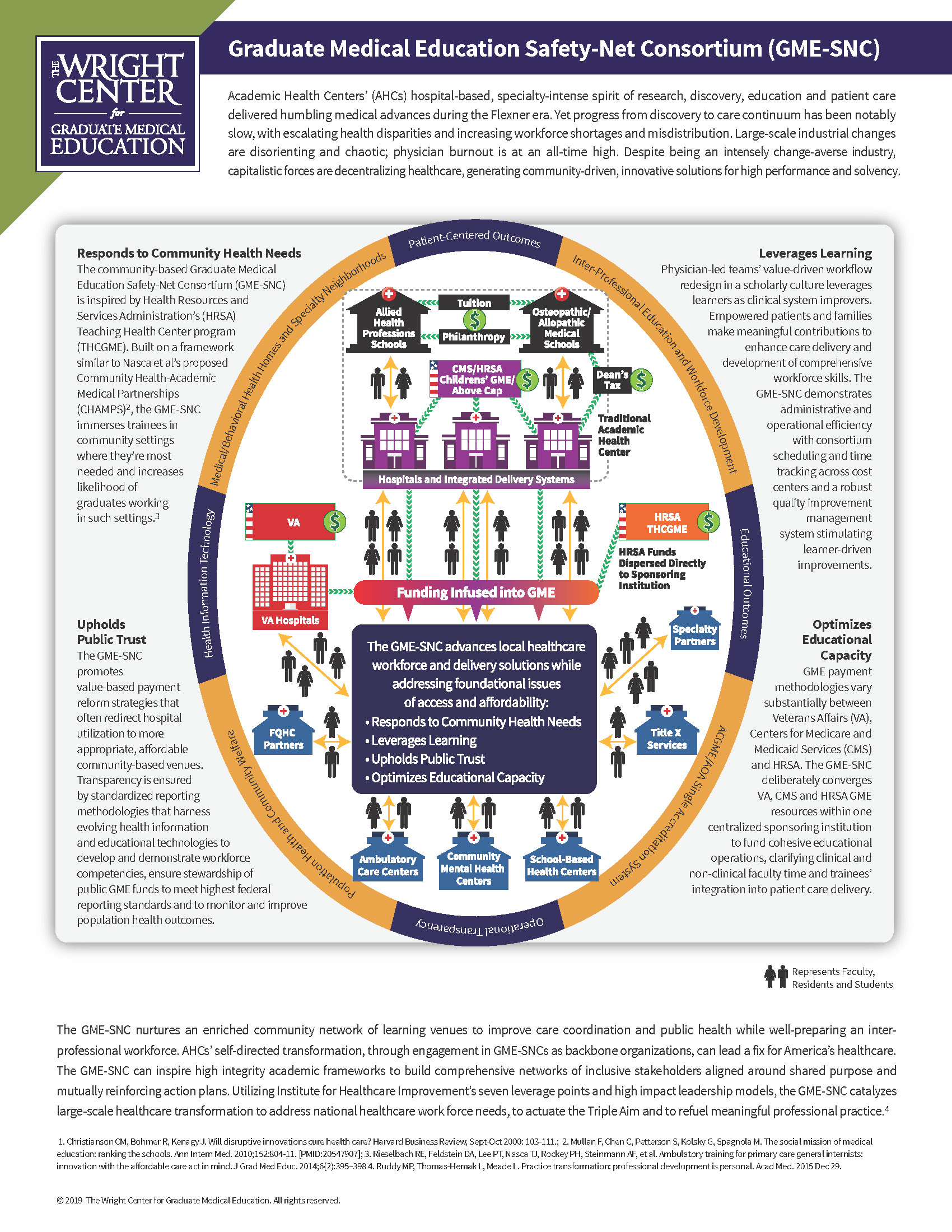 For millions of Americans, accessing affordable healthcare becomes more difficult each year. In 2000, approximately 1 in 8 Americans had an “unmet medical need due to cost;” by 2010, the number had risen to 1 in 5.(1) Today, 79 million people live in regions officially designated as primary care Health Professional Shortage Areas (HPSAs).(2)

Areas of particular deficit often contain a high incidence of patients on Medicare and Medicaid and those who are uninsured, whom many practices do not accept due to lower reimbursement rates, increased paperwork and higher cancellation rates. The nation’s rising geriatric population—which is expected to more than double by 2060—is also straining the limits of practicing physicians.(3) Compounding the number served by an already struggling system, the Patient Protection and Affordable Care Act of 2010 extended coverage to 20 million uninsured Americans.

Many Community Health Centers (CHCs) or practices strive to meet the ever-evolving needs of their patient populations; however, they often fall short due to provider vacancies. In fact, ninety-five percent report a current provider vacancy, and 69 percent have a specific vacancy for a primary care physician.(4) CHCs play a vital role in providing primary care to the underserved. These ambulatory care centers serve 28 million patients each year, including one in three who are low income or below the poverty line, one in five uninsured and one in six on Medicaid.(5)

A few compound causes of this complex healthcare access and affordability debacle?

While the patient population increases and diversifies each year, the number of primary care physicians equipped to serve cannot keep pace. The number of medical school graduates is significantly higher than the number of available residency slots, and in fact, more than 100 applications are received for each Teaching Health Center residency position. Every two years, HRSA Graduate Medical Education (GME) funding teeters on the precipice of continuation, expansion or elimination. Limitations and restrictions on new programs and program growth are in desperate need of overhaul; some policies and legislation even date back more than 40 years. Of the physicians who do choose primary care, residency opportunities are far less abundant than the number of medical school graduates each year ready to fill these slots.

America’s doctor shortage does not discriminate and regions across the country—both rural and urban—are in dire need of primary care providers.

The primary care physician shortage is inextricably linked to the traditional Graduate Medical Education (GME) training model. The majority of federal GME funding, which comes from the Centers for Medicare and Medicaid (CMS), is tied to hospital-based, inpatient training settings. Subspecialty residencies also offer lucrative incentives for both residents and training programs, including potential earning outcomes and remunerative diagnostics and procedures. Consequently, since 1996 there has been an 87 percent increase in residents pursuing subspecialty medicine, compared to a 23 percent increase in general internal medicine, family medicine and pediatrics.(6) Location of residency programs may also play a key role in the provider misdistribution in areas of high need. More than half (55%) of family medicine physicians practice within 100 miles of their residency program,(7) but only 6% of family medicine and 1% of internal medicine training sites are located in rural settings according to a 2016 survey of over 3,000 training locations nationwide.(8) If current trends continue, it is estimated that by 2030, we will be facing a shortage of up to 120,000 physicians nationwide.(9)

Though it is easy to lament and fall paralyzed to the magnitude of the shortage, relentless and passionate thought leaders around the country are collaborating and advocating for community-wide engagement to cultivate consortium models and actualize Nasca et al.’s Community Health Center and Academic Medical Partnerships (CHAMPs) vision to catalyze industrial redesign of our American primary care delivery and GME systems.

In response to these resounding public health concerns, HRSA’s Teaching Health Center Graduate Medical Education (THCGME) program was established as part of the Patient Protection and Affordable Care Act of 2010. This innovative GME payment modality was intended to generate primary care residency training programs within community-governed consortiums not departments of hospitals or medical/dental schools. At its onset, $230 million was allocated to be distributed over a five-year period, infused into HRSA-designated Teaching Health Center (THC) programs.

As well as being an inaugural awardee of HRSA’s THCGME funding, The Wright Center for Graduate Medical Education has consistently remained the largest designee for nearly the past decade.

For the first two years, the defined Per Resident Amount – also known as the PRA – was earmarked at $150K. Funding was slated to be evaluated and re-determined in 2013.

The initial THCGME funding fueled rapid growth and transformation of The Wright Center for Graduate Medical Education’s regional Internal and Family Medicine residencies in Northeastern Pennsylvania. The first class of Wright Center for Graduate Medical Education THCGME residents practiced in community-based training environments and within regional FQHCs throughout their three years in the program. The learning track followed the pioneering Beyond Flexner model, emphasizing community-minded health professionals as agents of more equitable healthcare despite prevalent disparities.

The Wright Center for Graduate Medical Education’s growth solidified its designation as the largest HRSA-funded THCGME consortium in America. With diversified and converging funding streams including CMS, the VA and HRSA, as well as multi-payor revenues for safety-net services, the organization continued to strengthen partnerships with regional clinical learning environments and provide immersive, community-based training opportunities for residents.

Between the 2011-12 and 2018-19 Fiscal Years, HRSA’s THCGME program swelled to encompass 56 Teaching Health Centers with 728 funded positions in primary care, psychiatry and dentistry. Advocacy efforts along the way enabled reauthorization of the THCGME, in 2015 under the Medicare Access and Chip Reauthorization Act (MACRA) and then again under the Teaching Health Centers and Graduate Medical Education Extension Act of 2017. Not all THCGME programs could withstand the variations in funding levels from year to year, though. Assuming the necessary risks associated with welcoming residents into a three-year training program with the guarantee of funding for only two years continued to pose a challenge. Two of the original Wright Center for Graduate Medical Education National Family Medicine Residency partners closed their GME programs - NYU Lutheran in the 2016-17 Fiscal Year (FY) and Virginia Garcia in the 2018-19FY.

And although the road has been paved with uncertainty and challenges, the wins were certainly monumental. In October 2018, The Wright Center for Graduate Medical Education's National Family Medicine Residency (NFMR) became a part of the nationally significant journey towards a Single Accreditation System, achieving initial ACGME accreditation and successfully stretching traditional boundaries and historical geographical constraints of the process. In 2018, the Balanced Budget Act increased and extended HRSA's THCGME program’s funding and, for the first time, allowed payments to be allocated to newly-established teaching health centers.

The Impact: Regional and National Results

Now the largest THCGME consortium in the United States, The Wright Center for Graduate Medical Education has seen tremendous, trackable learning outcomes and encouraging practice patterns from its graduates. The first class of regional internal medicine and family medicine residents whose training was made possible through the THCGME program graduated in 2015, and in 2016, the first class of 21 NFMR physicians completed their training. At that time, 16 of the NFMR graduates confirmed employment in community-based health systems and committed to practicing in underserved areas across the country. All residency slots within the NFMR are completely funded through HRSA’s THCGME initiative. Dr. Rachel Gougian, a 2019 NFMR graduate who chose to practice in the Unity system after completing her residency there, notes, “Being a family physician at Unity gives me the chance to truly impact, educate, encourage and guide patients in a way that a hospital-based job never could.”

Projected financial benefits of the THCGME program extend beyond its lean budget. Over the next five years, the program has the potential to yield up to $1.8 billion in public program savings, both through care provided by residents in Teaching Health Centers ($288 million in Medicare/Medicaid savings) and through the next five classes of graduates practicing primary care (over $1.4 million Medicare/Medicaid savings).(10) Even more importantly, the program has the potential to reduce healthcare costs, unnecessary procedures and even mortality rates. Every increase of one physician accepting Medicare per 10,000 beneficiaries is associated with 82.8 fewer deaths per 100,000, 160.8 fewer preventable hospitalizations and 712.3 fewer emergency room visits. Further, every 10 additional primary care physicians per population of 100,000 was associated with a 51.5-day increase in an average person’s life expectancy.(11)

While some THCGME outcomes are highly trackable, a comprehensive, effective tool for measuring the total cost and true tangible and intangible value of the program does not yet exist. It is into this nebulous space that The Wright Center for Graduate Medical Education’s leadership, key executives and staff from its FQHC NFMR partners, and consultant Baker Tilly, embarked on an in-depth analysis and deep-dive Multi-Dimensional Evaluation Project (MDEP) in 2018 to further validate HRSA’s significant THCGME investment.

Our collective work closing the primary care physician gap is far from over. Continued strides towards a brighter, healthier future for all Americans, promoting delivery of comprehensive healthcare services to patients who need it most and continuing the sustainability and growth of our country’s Teaching Health Center program hinges on our federal government and advocacy activities related to overall primary care GME reform.

In July 2019, HRSA awarded three grants totaling $6,812,541 to The Wright Center for Graduate Medical Education. Rep. Matt Cartwright, a member of the House Appropriations Committee, stated, “I continue to be an advocate for programs like the Teaching Health Center initiative that use federal dollars, in communities like ours in the 8th Congressional district, and across the United States, to provide affordable and quality medical services” said Rep. Cartwright. “And I applaud The Wright Center for Graduate Medical Education in being recognized for as a valuable source of physician workforce renewal in Northeastern Pennsylvania.”

Current funding is set to expire again in late 2019, unless Congress acts to reauthorize and fund it. The American Association of Teaching Health Centers (AATHC) continues to lead the charge regarding advocacy and legislative efforts, in tandem with invested stakeholders across the country and within our government. An extension, and possibly an expansion, of sustainable Teaching Health Center Graduate Medical Education funding can be a catalyst for change, an inspiring demonstration of a republican and democratic collaboration for continued pursuit of the Quadruple Aim — outcomes, access, affordability and joy — in America.